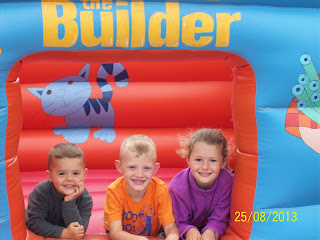 Well that’s another Bank Holiday over and done with!! And what a fun packed one it was!!
The weekend got underway with a visiting cabaret act on Friday night, which according to everyone who was in the club, was very good!!
Then on Saturday we had our very own version of Crufts!  We were not sure if it was going to go ahead at the start of the day as the weather wasn’t very nice, but thankfully the rain held off and the mist cleared up a bit so that it could go ahead.  And what a show it was!!  Loads of you turned up, despite the weather, and fun was had by all, as you can see from Blade and Gizmos joint blog!
Saturday was rounded off with yet another good visiting cabaret act in the club, along with Dean and his party dances.  He was also selling those all important raffle tickets for our raffle for the Great North Air Ambulance, which was drawn on Sunday.
Well Sunday eventually came and there was a lot of excitement on the park for our Fun / Sales day.  8.30 am and the two bouncy castles arrived, (which got all the staff excited as we’re all big kids at heart!), but Sue was firm and said that we were not allowed on them as they were there for all you visiting and stopping on the park.  Once the bouncy castles were set up and ready to go, the maintenance lads were on with bringing out the tables for the table top sale, the table top games and all of Steve’s caravan and bike things which he was selling as he no longer needed them. 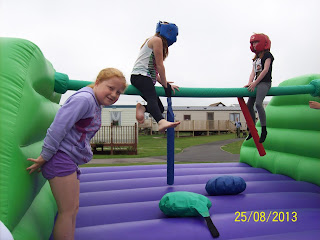 11am was soon upon us and you all came out to see what was going on.  We had music playing all day to get everyone in to the spirit.  The bouncy castles went down well as I don’t think there was a moment all day when they were not occupied!  The table top games also went down well.  You all seemed to love the pick a straw game and the apple bobbing.  At lunch time there was a visiting entertainer, who did some comedy magic which kept all the youngsters entertained for an hour before it was back to the bouncy castles and table top games.  The table top sale went well as by mid afternoon the amount of tables in use had dropped down to half, which means you were all putting your hands in your pockets.  They were also doing a separate raffle, for which the proceeds where going to St Leonards Hospice, which is a charity close to many on site.  By mid afternoon you had all worn yourselves out and had headed back to your caravans or headed into the club for a cheeky pint or two!
To round the weekend off we had another visiting cabaret act which once again went down well.
All in all, another great weekend was had by all at Whitby Holiday Park, even if the weather wasn’t that great!! 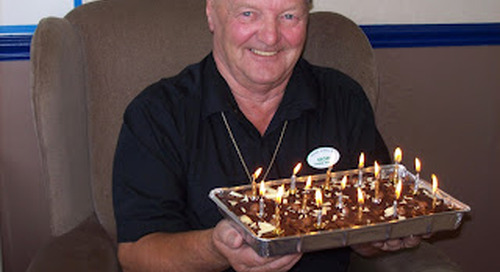 Geoff celebrating his 73rd birthday here at Whitby Holiday Park.Geoff is a loyal...