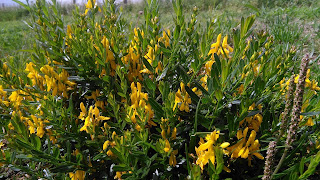 Dyer's Greenwood is a permanently growing shrub which looks like a broom ( hence the name and can grow up to a height of 60cm or 2ft.

It has firm branches which have interchanging leaves that appear like spears.  The length of the leaves normally range between half to one inch and have soft stalks.  The sprouts or tender branches of the herb have pointed ends that bear yellow coloured pea shaped blooms, which begin to blossom in July.  The flowers can be anywhere from half and inch up to three quarters of an inch long.  The flowers 'blow up' when they are visited by insects to collect the pollen.  Once the flowers start to fade and disappear, pods appear in their place.  On ripening, these pods turn brown and can contain anywhere between 5 to 10 seeds.

The shrub is a dwarf or midget variety and is generally grown in bunches.  It can be found in pastures all over England, and is believed to make poor soil fertile.

The blossoming tops of the shrub produce an excellent quality yellow colour dye which has been used by dyers to for many years.  This particular colour tends only to be found with this particular plant.

As well as being known for this particular colour dye, Dyer's Greenwood is also well known for its medicinal properties.  Although Dyer's Greenwood has never been acclaimed as a formal medicine, the whole plant, including the blossoming tops as well as the seeds, have all been used therapeutically.

The Dyer's Greenwood plant is supposed to be indigenous to the Mediterranean regions and western regions of Asia.  Yet, somehow, we are told, by a local lady who is part of the Whitby Naturalist Club, (and who keeps an eye on the plant for us) that the plant has taken root on our park, just before the path that leads along the cliff tops into Whitby.  There is quite a bit which has taken over the bankside.  We are avoiding cutting the bankside in this area as we are trying to encourage more bees and butterflies onto the park ( and Dyer's Greenwood is a brilliant plant for enticing bees as they just love it!).

It is said that Dyer's Greenwood can be easily grown provided that the soil that is used is light and well drained and in an area that gets full sun light.  It is also said that Dyer's Greenwood can withstand extreme cold conditions to the extent of -35oc !!  So even with the extreme weather we can get here on the Cliffs of Whitby it seems that we are an ideal place, as it seems to love growing up here!

The Whitby Naturalists Club is holding a Treasure Hunt on park next week on Thursday 4th August, so why not pop along and join in the fun and games and see if you can spot this wonderful plant on site!!

Are you still looking for that perfect getaway this year?  Then why not book a stay with us in one of our s... 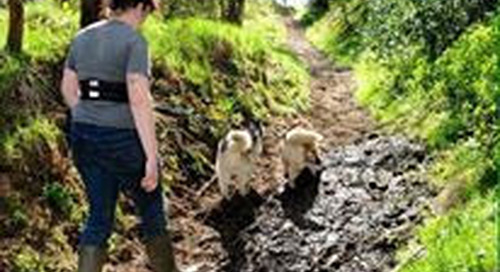 Try something new on your holiday with us - Husky Trekking in North Yorkshire!!

Husky Trekking in North YorkshireWhile on holiday with us why not try something different to fill your day!...