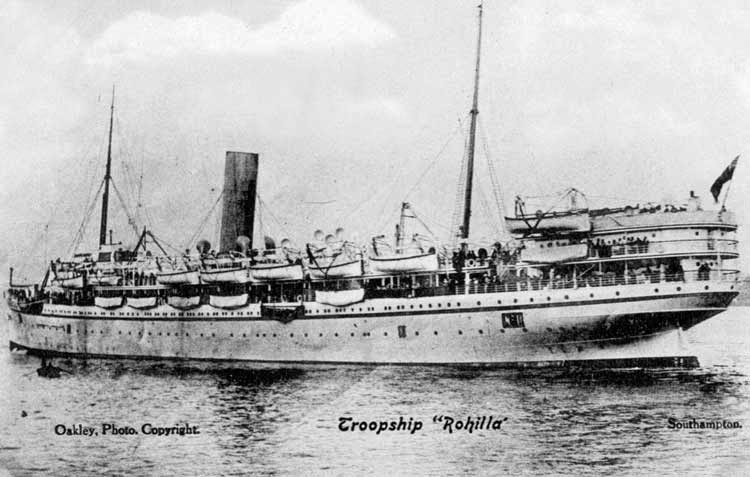 Ship no:381 was launched on the 6th September 1906 at the Harland and Wolff shipyard.  It was delivered to the British India Steam navigation Company Ltd on the 17th November 1906 where she was christened the S.S. Rohilla.  She was originally built as a passenger and cruise liner, before being turned into a troop ship in 1908.  In 1914 the Rohilla was requisitioned as a Naval Hospital Ship.

The ship was adapted to accommodate her new role as passenger accommodation was converted into hospital wards.  The ship was equipped with two operating theaters complete with x-ray appliances.  Overseeing the work was Captain David Landless Nelson who had worked hard in his career qualifying as Second Mate when he was 18.  He was finally awarded his Master Mariners Certificate when he was nearly 40!

The Rohilla left for Dunkirk on a route that would take her down the East coast of.  This was a coastline which the Captain had never sailed before.  He had to overcome German submarines and mines scattered around the coastline in many uncharted minefields.  Due to war time restrictions navigation lights were turned off and navigation signals were muffled.  This mixed with poor weather did little to help keep an accurate course.

It is believed that the Rihilla's last fix was taken and a new course set as they passed the Farne Islands off the Northumberland coast.  The Coastguard at Whitby was positioned on the cliff and in good weather conditions would of had an unparalleled  view of the coast.  He could see the outline of the Rohilla and knew instantly that she was heading for the rocks just off the coast of Whitby.

Under normal conditions the hazard would of been marked by the Bell Bouy whixh is moored there permanently, but due to wartime conditions the bell had been silenced and the light extinguished.  The Coastguard tried in vain to warn the vessel of the impending danger and despite signalling for thirty minutes the Rohilla failed to alter her course.

At 4.10am on the morning of Friday 30th October 1914 there was a terrifying shudder as the ship hit the rocks here at Saltwick Nab at full speed with 229 passengers and crew on board.

Although the ship was grounded only 600 yards from the shore, the bad weather had made any rescue attempts perilous and within minutes the Coastguard had fired off the explosive maroons alerting the town to the unfolding drama.

Whitby's number one lifeboat the Robert and Mary Ellis was unable to launch due to the bad weather.

Dawn brought no further chance of launching the lifeboat as the weather was still bad.  Whitby's number 2 lifeboat, the John Fielden was the only other option.  This lifeboat was rowed across the harbour and then lifted over an eight foot wall on the East Pier.  It was a huge task having to drag the very heavy 36ft lifeboat across the scar.

The John Fielden managed two trips out to the stricken Rohilla and on its first trip managed to save 17 members of the ships crew and on the second trip saved another 18 men.

After it's second trip, the John Fielden was that badly damaged that they had come to a decision that it was not fit to launch again.  It was dragged on to the scar where it was abandoned to the sea.

Unable to stand by and do nothing, the lifeboat men of Whitby came up with another daring and corageous plan to aid those still on board the Rohilla.  In an amazing feat of human spirit the Upgang lifeboat, the William Riley was hauled over land to the cliff top where it was then lowered down 200ft to the bottom of the cliff.  After this amazing feat of getting the lifeboat there, the treacherous water conditions had made it impossible for the boat to launch, and when it finally did it was beaten back.

Lifeboats from other towns had been called up to help with the rescue.

Out of the 229 passengers and crew on board the Rohilla only 146 survived.  Bodies began to wash ashore and were collected by the townsfolk of Whitby, and some were never found.

Some of the lifeboat crew awarded medals for their bravery.  Many of the crewmen from the Rohilla were buried in Whitby where the owners of the Rohilla erected a monument to the ship's loss.

It was clear from advances in shipbuilding and vessels of that era that a new breed of Lifeboat was needed and shortly after the loss of the Rohilla, Whitby's outdated rowing boat was replaced with a motor lifeboat.

The Royal National Lifeboat Institution lists this event as one of the worst services in its history.  Numerous medals were awarded.  Of the lifeboats, the John Fielden was wrecked during the rescue, the Henry Vernon was reported as being broken up in the Bay of Biscayand the whereabouts of the Queensbury is unknown.

Of the 229 passengers and crew on board the Rohilla, 5 of them were women.  One, Mary Roberts, had just two years previously survived the sinking of the Titanic!  She also survived this sinking and lived to tell the tale of both!


The wreck of the Rohilla, or what is left of it can still be seen to this day when the tide is out down at Saltwick Bay, right underneath us here at Whitby Holiday Park! 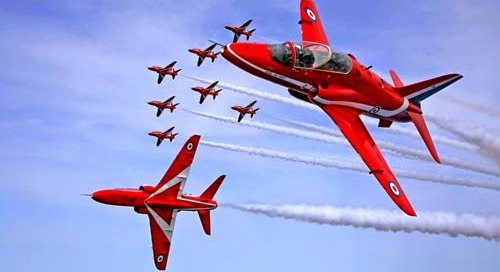 Whitby Regatta 2014 and the Red Arrows!! 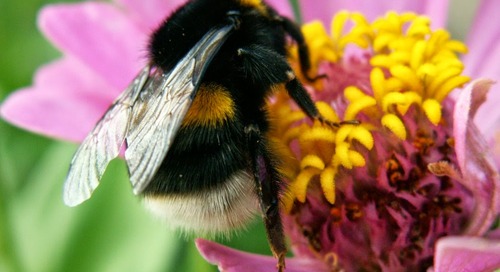 BumblebeesBumblebees are a quintessential part of our Spring and Summertime....