July 20, 2013 whitbyholidaypark
AND PHOTOGRAPHY
Situated high up on the cliff top overlooking and the North Sea, is the ideal base for anyone who has an interest in photography.  Situated where we are, the holiday park is surrounded by many natural beauty spots where you can spend many an hour just snapping away taking photo after photo after photo.
Now if you’re like me and stuck in an office six days a week, you might think it difficult to find time to go out and take some photos.  Well, it is and it isn’t!  I tend to take mine when I’m out on an evening or on my day off when I’m walking the dog.  I even took one out of the window half way up the stairs at home because the colour of the night sky was just amazing!!  And I’m no photographer!! I don’t have one of these fancy cameras that can do anything and everything.  All I’m using at the moment is my HTC ONE X smart phone.  So definitely nothing fancy, but the quality of the photos seems to be brilliant.
is home to the well known photographer Frank Meadow Sutcliffe who’s photographs have won many awards all over the world.  You can walk into almost any shop, pub, restaurant or café and you will see many of his photos lining the walls giving us an insight into what life was like in during the reign of Queen .  He built up a business in the town which rooted him to and the surrounding area.  By photographing the ordinary people that he knew well he built up a most complete and revealing picture of a late Victorian town and of the people who lived and worked there.
I am in no way what so ever comparing myself to Frank Meadow Sutcliffe (he was a professional, and I am not!) But it is easy to understand once you have visited , why you would want to become a photographer, or like me, simply just take a photo here and there because the scenery is just so amazing.
One of ’s most famous icons, and possibly one of its most photographed icons, is Whitby Abbey.  In Frank Meadow Sutcliffe’s time, people were farming on the lands around the abbey, which can be seen in the following photograph: 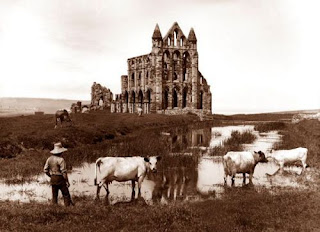 And what a picture this is!  I certainly can’t imagine taking a photo like this.
I was walking in to town from the one day along the cliffs.  It was late in the afternoon and it was early on in the year so it was still getting dark early on in the afternoon.  I was not far from the abbey when I had to stop and take a photo(again on my smart phone) because there was the most amazing sunset behind the abbey surrounding it in wonderful purples, oranges and reds. 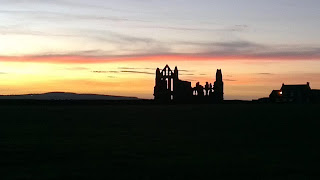 This is the photo I managed to get and I was very pleased with the outcome, especially as it was taken on my phone after a long day in the office.
I also help out in one of the local pubs in town a couple of nights each week and was looking out the window the other night and found another perfect picture opportunity.  So I stood in the pub doorway with my phone in hand and took several pictures, uncertain of how they would turn out.  Below is the one which I think is best.  It shows late on a Thursday afternoon, just as the sun is starting to set.  What made me most want to take the photo was the reflection on the water of the surrounding houses, the pier and all the little sailing boats floating on the water. 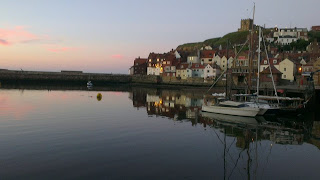 As I said earlier, I’m no photographer, but yet again I was very pleased with the outcome of this photo and have had some lovely comments off friends and family who have seen it.  A suggestion was also made that I should by myself one of these fancy cameras and take it up as a hobby!! My answer to that was I’ll think about it!!
I know at the moment we have a photography competition going on at so it would be interesting to see what pictures other people have taken of the park or of the surrounding area.  Now I know that I’m not supposed to enter the competition, what with working in the office as you’ll all think it’s a fix, but I may just squeeze a couple of entries in and see what people say.
So to any of you who are staying on the park at the moment, or who will be coming to stay with us in the coming weeks, get out there with your fancy cameras or just your smart phone, like me, and get snapping!!  You never know, you could take the winning photo and have it displayed for everyone to see.
Kayleigh
Reception 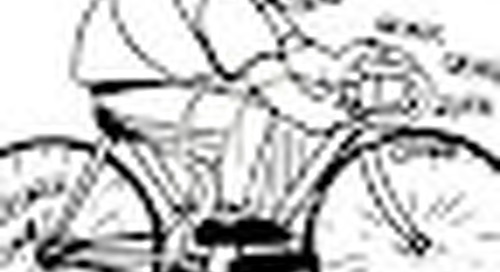 Cycling In & Around Whitby Holiday Park

Whitby HolidayPark is a great location to ‘get on your bike’ and discover... 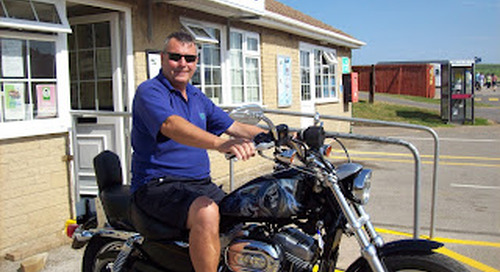 STEVE’S CHANGE OF LIFE SINCE HE HIT THE BIG 50Most of my life I have had sports...